The Story of LETTERS TO THE BLIND

Dayton Ohio’s hybrid Metal band known as LETTERS TO THE BLIND suddenly burst on to the scene seemingly out of nowhere in the summer of 2014. However, the band originally began as a long distance recording project between guitarist Blaine Gordon and vocalist Chaz Bond.
The Genesis actually took place in the summer of 2011 when Blaine decided to contact Chaz about singing on a two man recording project while he was living in Florida. Chaz was still in Ohio where the duo had previously worked together in the band BioGenesis back in 2004. Blaine went on to write and produce two songs in Florida which were sent to Ohio for Chaz to write and record vocal lines and lyrics. The first two songs turned out to be “Suffocate” and “Generation Sin”.
Seeing the projects potential, Chaz thought of LETTERS TO THE BLIND as a possible album title but Blaine felt that it would be perfect as the name of the project itself and the deal was sealed. In the late summer of 2011 Blaine and Chaz created the band’s Reverb Nation page and made a brief announcement about the project’s existence. The page featured the projects first two songs. Despite a very positive response Blaine and Chaz decided to lay low while pondering the future of the project as both had a strong desire to see it become a full live band. However, the distance between Florida and Ohio was a major hurdle. Decisions had to be made. Would this become a real band or would it just become a record by two long distance musicians? The goal they eventually agreed upon, was to complete a five song demo to shop to record labels.
Two years would go by while Blaine and Chaz quietly worked on the project while keeping it out of public view. Finally in 2013, three more songs were written and recorded the same way as the first two. Music by Blaine. Vocals and Lyrics by Chaz. Finally in the summer of 2014, Blaine made the decision to relocate back to Ohio in order to pursue the project on a full time basis. Right away, Blaine’s long time friend CJ Jones officially became the drummer and long time BioGenesis Bassist Randy Walton officially joined as well. At last LETTERS TO THE BLIND was no longer a recording project, but a real band!
Once again an announcement was made about the band’s existence and before they knew it, they were being asked to play shows even though they only had minimal songs to perform.
Today the band is preparing to officially unleash their five song Demo. It will soon be available at live shows and online. The band will continue writing new songs as they prepare for a full length debut album. Look for LETTERS TO THE BLIND to grow their name and their amazing brand
of hybrid Metal in the coming months and years. Here’s to the future! 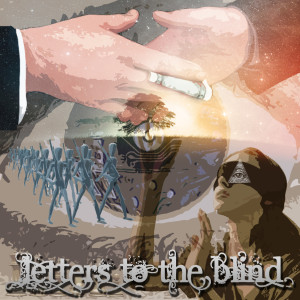